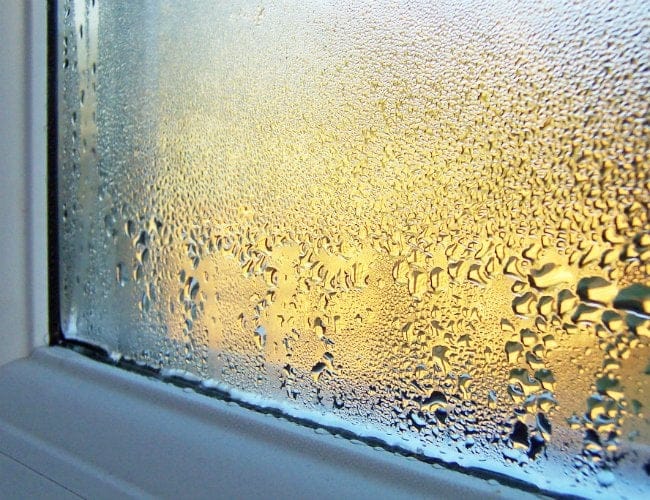 Condensation, also called sweating, forms on building materials when the temperature drops below the dew point, which is the temperature at which droplets of water vapor are forced so closely together that they coalesce into liquid water.  Because of their characteristic thermal conductivity, components made of metal are usually the first places where condensation will appear in a building.

Condensation can be a problem because droplets can pool and destroy building materials, such as when condensed water chronically drains from a toilet and weakens the bathroom tile floor and subfloor. Condensation can also pool and encourage the growth of mold, which is a serious health hazard. Dripping overhead pipes can be an extreme annoyance in a finished basement, as they may damage carpets, furniture and valuable electronics. Pooled condensation can even cause an electrical fire, or electrocute building occupants.

Where does condensation typically form?

Metals also vary in their thermal conductivity.  Thus, they tend to cause water vapor to condense.  Inspectors can be aided by a rule of thumb that states that a metal’s ability to transfer heat (and, therefore, create condensation) is roughly equal to that metal’s electrical conductivity. Electricians and some inspectors may know that, of all metals, copper is the second-best conductor of heat and electricity, meaning that it’s more likely to respond to a brief burst of cool water or air than other metals, such as steel or lead. The metal with the greatest conductivity is silver, but it’s far too expensive to be used in ordinary construction.

Condensation is more of a problem in older homes, which often lack a vapor barrier or sealers in the concrete. In this instance, moisture in the ground is forced through the foundation and masonry, which is why condensation is commonly found in the basements of older buildings.  The two strategies used to reduce condensation are to lower the relative humidity of the air and to keep surfaces from becoming cold. These strategies can be practiced in the following ways:

Also, keep in mind that what appears to be condensation may actually be a water leak. If insulation and dehumidification don’t seem to improve the condensation problem — especially if it’s appearing in only one place, homeowners should contact a qualified plumber.

In summary, condensation will form on cold surfaces if certain precautions are not taken.  If left unmitigated, it can lead to moisture-related problems that can affect structural components, as well as the occupants’ health.